Lazy Man's Supper is a dinner party for the Martha-challenged. I don't have an army of staff to fluff throw pillows on my leather couch, dust blinds and mantles, or make sure the candles are lit precisely 5 minutes before the guests arrive.

But I love to cook and spend time with my friends. So I do. And I make sure they know there aren't communicable diseases, and there isn't fine china either. Here was the cattle call for last night's dinner:

The guest list was fairly large for a non-dinner party herd. E and Slim, K, M and Timmy, Chez and Jer, CW and STK, DT, PG, and Herb. PG, DT, and Herb weren't able to make it, but everyone else came in three shifts, so it all worked out. Jer had to leave early to play a gig, E, Slim, and K had to bolt for a beer tasting comedy show (I know, right, what was I doing at home?). CW and STK were the swing shift, and M and Timmy came in to finish off the second tray of pasta.

Yes Virginia, there is a group of vacuum cleaners with skin, and eyes, and mouths. And they will eat your 9 x 13 trays of baked rigatoni with eggplant and spicy sausage if you're not careful. 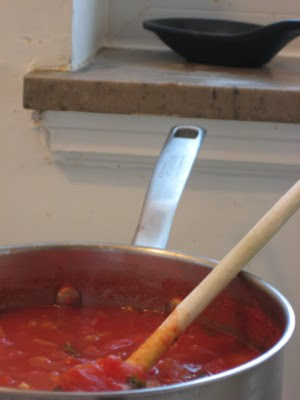 I started off the day by making the marinara. Simple, fresh, and extra so I can have a nice meal later in the week without working at it. Three jars of whole, peeled tomatoes (hand crushed, play with your food); three small onions, diced; 5 cloves of garlic, minced; 10-12 basil leaves, hand torn; olive oil; salt & pepper. Sweat the onions for 4-5 (salt & pepper here), add the garlic for one, throw in the tomatoes and simmer for 10, throw in the basil, stir through, reseason, remove from heat.

Once that got sorted out, Chez called and was on her way to the wine shop. I dutifully put on shoes and went downstairs to wait for my ride. I mean, I told people I would have a couple bottles of wine, and I only had three bottles of red and three of white. Clearly I was in danger of false advertising by only having six bottles in the apartment.

We fixed that but good. And having Jer as your guide at the wine shop is a treat too. Chez went straight for two of her faves, the Ring Bolt Cab and the Graham Beck's Gamekeeper's Reserve Cab. 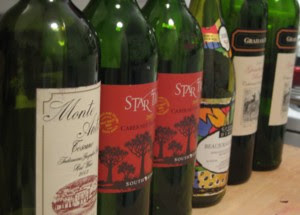 I went a little heavier on the volume side, with excellent results. We got through both bottles of Orange River Winecellars Star Tree 2007 Cab, a very tasty 2003 Monte Antico Toscano (Check that link CY, Google tracked me down a Nashville source), and a bottle of 2007 Beaujolais Nouveau.Oh, yeah, and M drank white because she can't drink red. She was enjoying a lovely bottle of Pinot Evil Pinot Gris.

My suspicion whenever that happens is that the person is reacting adversely to sulfates the Man makes importers put in bottles of wine a preservative to save us. I always thought when I went to the town of St. Emilion I would find all of the inhabitants walking around with a dull headache at 4pm because of all the red wine they drank. But NO dear reader, nary a grimace. Unless of course the particular bottle they wanted was unavailable. They drank red wine to their heart's content.

I started off with a cooking glass of the Pinot Gris, then had a glass of Star Tree before dinner, the Graham Beck with my plate of awesome, and a glass of the Monte Antico as things wound down. Time frame, dear lush-watchers? Those glasses happened over a period of 4 hours. It was, as my e-mail advertised, "the goodness of the lazy man's supper, no pretense, just good peeps and good food."

Back at the ranch, I was frying sausages to brown them and then sauteing eggplant in olive oil to caramelize. I like the results. Makes the kitchen smell fantastic to have a fresh pot of marinara on the stove and sausages frying in the pan. 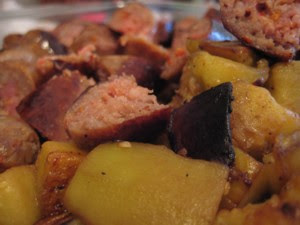 Food awareness comes slowly sometimes. You don't realize you've learned something until you've done it a dozen times. I remember the first time I realized olive oil was 'fruity.' Now every time I buy a bottle, I'll smell the raw oil before using it, and I'll notice the fruit when I pick a piece of eggplant to make sure there is enough chew left, and enough fruit imparted, to consider the sauteing completed.

Once the pasta was boiled, the sausages and eggplant finished, the marina cooled, and the mozzarella diced, into the roasting pan it went. Into the roasting pan because when you have two pounds each of sausage, pasta, and mozzarella; 4 quarts of marinara; and two large eggplants to mix together, there is not really a bowl in the non-commercial kitchen that will do the trick. All that goodness, mixed up? Fits into two 9x13s...AND and 8x8. Two and half orders. Turns out that was okay. We ate it all. Two trays minus a to-go for DT were taken care of at the apartment. The half tray went to the bar. The doorman was happy to see me. 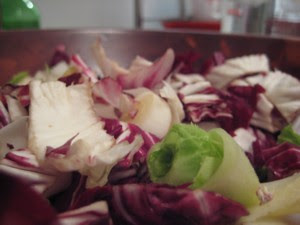 Folks at the house also had a salad and bread. The bread was store bought, high-end, Italian-style asiago bread. The salad was a classic I don't make enough. A radicchio and endive salad with citrus vinaigrette. Dressing was the juice from two navel oranges, one lime, salt, pepper, 1 T Dijon mustard, and olive oil whisked in to emulsify it all. Probably wend 1 t on the salt and 1 1/2 t on the pepper. That was a little more than I needed for a salad that fed a few more people than were there. Saves well for a few days, so don't worry about over doing it.

whadaguy
i say - charge a cover

i think you may have hit on a brilliant, if controversial, idea.

IF you start charging a cover then I expect a live band, PG barking in the background, dimly lit smoke filled rooms, and some idiot passed out in the bathroom.