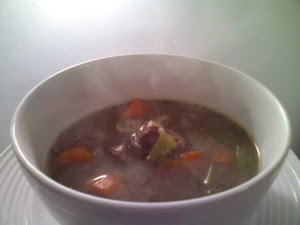 It just didn't have oooomph. I think it got better once it came off the stove, and it certainly improved when I finally realized I forgot to add wine (luckily, we hadn't polished off the bottle yet). But it was just a bowl of stew, and I was really expecting a mind-blowing bowl of the the most amazing simple dish ever. Eh, I guess I get off nights too. We still devoured it.

After it was all said and done, I should have know there was no acid in it and that's not tasty enough. I spent a lot of time thinking that it was so similar to my pot roast it will, by it's very nature, be delectable. Pot roast gets tomatoes in it. Acid. Shoulda known.

And really, I should have deglazed the pan with the wine. And I probably should have used beef broth. But I had just made a fresh batch of chicken stock (w00t) that was strained and golden and aromatic. I mean really, you could stand across the room and get that grandma's chicken soup tendril of flavor in your nose.

And too, the decision that there wasn't enough room in the pan for potatoes was faulty estimating on my part. But the stew didn't REALLY need them, did it? I mean tossing them in oil, paprika, crushed red pepper, salt, and pepper and roasting at 400 degrees for 45 minutes wasn't bad, was it? Nah. That was okay.

In the end, I had produced a very tasty stew. You can try to make it too, but really, there's no need with this one. I need to get a better beef stew recipe down. In fact, why don't y'all tell me how to make a better beef stew...