I've been out of town for a few days, eating well, but not cooking. Here's how I'm getting back into the swing tonight. 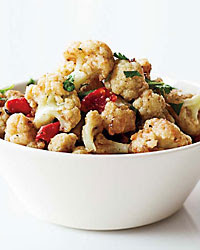 Here's what Food & Wine said about the recipe in the January edition:

"Adventurous home cooks are looking to South Asia for inspiration. One fantastic guide is Indian-cooking expert Raghavan Iyer, whose 660 Curries is due out in March. This curry draws its lively flavors from cumin, coriander and hot green chile."

I, for one, am willing to be an adventurous home cook tonight.

Posted by redneck muppet at 8:27 AM