"Located near the West Virginia State Capitol, Bluegrass features a beautiful dining-room restored to it's circa 1920's look with pressed tin ceilings, exposed brick and an oak floor. The decor expresses a connection to the arts. Several artists work in studios throughout the building, and bluegrass serves as a gallery for their works." 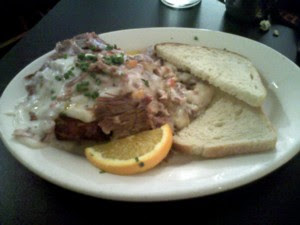 Local restaurants are treats to me. I'm a social creature, so I always have people over when I cook at home, and I always love to go out to eat. I'm not a foodie that shuns the 'cooked elsewhere.' So I love that there are some places nearby that satisfy my requirements for good food AND good people.

The exhibit you see before (er, above) you is the food part of the Bluegrass Kitchen. It's on the East End here in Charleston, which makes it even better, as it's a neighborhood joint. That plate of gloppy goodness is their corned beef hash with pepper gravy over a homemade potato cake with green and red peppers. For some reason, I need to tell you about the peppers first. Whatever they do to them (I suspect a quick saute), the peppers are still crunchy and sweet and flavor the whole potato cake. That's a flavor I always remember about the BK.

The corned beef? They make it. I told H (server and pal extraordinairre) that whoever was corning the beef should keep on corning. Turns out his name is Vinny. Vinny, you do damn fine work.

BK's food is fresh, portioned so as not to blimp-out all of Charleston, and Americana in the 'foodies like good food in cafe-setting restaurants these days' kind of way. There's the Perfect Chicken sandwich, the grilled black bean burrito, the mac n cheese (farfalle, creamy Monterrey Jack and cottage cheese, and peas), the homemade meatball sub (real meatballs, good bread, NOT a chain sammy rip-off).

And then there is the brunch. God bless them and their regular menu. It's really tasty. But the brunch is where I can't miss.

Today's special was a quesadilla with scrambled eggs, pico folded in, diced ham, and cheeses...mmmmmm, cheeses. The quiche was feta, mediterranean somethin' (I must confess to zoning out and dreaming of the dang quesadilla). There was a smoked salmon something too.

Me, I was choosing between the 'dilla, the corned beef hash, and the green eggs and ham (with my eggs poached instead of scrambled with the basil pesto folded in). 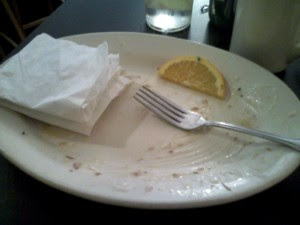 H and I chatted about my options for a minute. But he knows me. If there's homemade corned beef in a kitchen fewer than fifteen feet from my person, I'm getting it.

You can clearly see here that I made, if not THE right, at least A right choice. I would have left the toast too, but it was so good at being a gravy distribution vehicle. Distribution occuring in and near my gullet. The napkin got used. Had there been gravy remaining, it would have been a close call between using the spoon or the orange slice to make sure I rectified the situation.

BK is also very popular. I timed my entry to coincide with the early church service folks leaving and the late church service folks not having yet arrived. I timed it well. Sat at the bar then moved over to a table when I found out H was serving on the floor. (This timing also ensures that my grocery shopping ends at or after 1pm, so I can buy the half-case of wine in my cart after the blue-book alcohol sale laws have expired for another week.)

There were full tables and a wait started. One of H's regulars was sitting at a four top and just got up, moved her stuff to the bar, and gave up the table. "No sense in making people wait," she said as she put her newspaper and coffee down at the second stool of the six-seat bar. H didn't mind at all. He's good peeps. Good thing she was a nice lady too as the three ladies that sat down turned into five, then seven, with two just sort of hovering (not unpleasantly at all) near the table. Likely waiting for my two-top to open up next to their friends' table. Worked out well that my plate was 'damn-near-licked' clean.

Posted by redneck muppet at 1:44 PM