Jimmy Knew Crack About Corn, I Know About Bacon

Here's what you do.

And as a starting tangent (I am that guy. It's one of the reasons you read), I'd like to point out that the Kroger brand ingredients you see below make a damn tasty cornbread. Is artisinal, hand-ground cornmeal and local, hickory-smoked bacon better? Would a farm-stand dairy's sharp cheddar make this even more shazaam? Yeah, true on both counts. I'm a bit broke. And, really...I've been doing this for a while. I wouldn't make it if it didn't taste good. It's still from scratch, and it's still made with love. 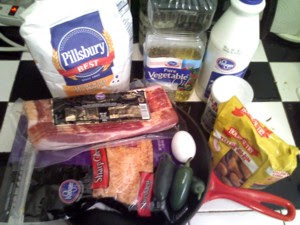 The cornmeal is House-Autry, and is quite a good meal to use as a base.

The first step is to buy a good cast-iron pan. You see mine here with step two working. That's called frying bacon. I have five thick-cut strips going. 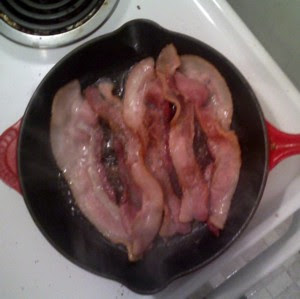 While that's going, first get the oven pre-heating to 400 degrees; then mix together one beaten egg, one-quarter cup of vegetable oil, and about one and one-half cups milk in a small bowl or large measuring cup.

Then, in a large bowl, mix one and one-half cups cornmeal, one cup AP Flour, 1 T baking powder, 1 t salt, and several grinds of pepper.

Dice up one and one-half jalapenos (leave in as much seed/membrane as you want heat. My typical cornbread removes the seed/membrane from half a jalapeno.

Add the jalapeno, chopped bacon (once it's cooked, put it on a plate with paper towels, drain it, then chop it), and about one cup of shredded sharp cheddar (if you splurge on the cheese, I won't tell Santa).

Mix a bit and form a well.

Add in the wet works and stir through a few times. Don't stir too much. Don't worry about a few cornmeal lumps. It's okay. Call if you need a little hand holding.

Notice that next shot? See that liquidy bit on the edges? 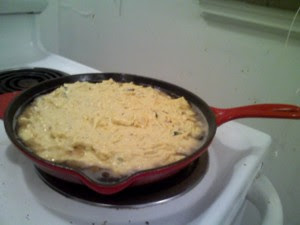 I don't drain off the grease, or at least not much of it. For five slices of thick-cut, I drain off a bit, leaving probably close to 4 T of tasty in the pan. Swirl it to coat the sides. Pour in the batter. Put it in the oven for 30 minutes. 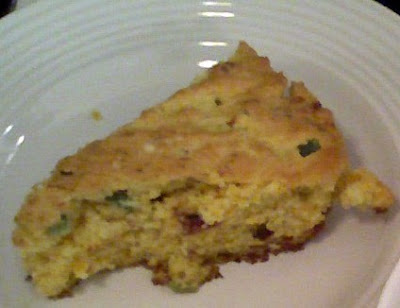 Take it out carefully.

The operative word there was not, as you might suspect, "take."

The operative word was "carefully."

Ask my palm. It now knows.

If the batter looks to dry, add a little milk. If it's too wet, add a little flour. It will look more dry than you expect when it's just right. You don't want pancake batter that pours into the pan, you want to have to spoon it in and spread it a little to get it evenly distributed around the pan.

Posted by redneck muppet at 9:14 PM

Yet another one I can't wait to try. Only I'm not woman enough to handle the jalapeno (despite what you may have heard.)