When you get to cook with Grandma 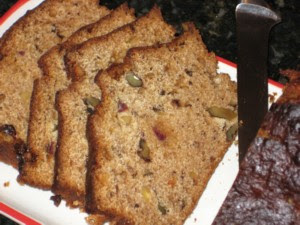 It has been long enough since I showed you all the aftermath of the baking to give you a look at what came out of the messy, floury, doughy process. This is the second year I have tried to make my grandmother's date nut bread. It's been a success both times, and is one of the reasons I am interested in baking more.

I don't think I have ever tried this recipe when it was made by my grandmother. She was older when I was growing up and cooked less and less. I remember the summer dinners at the farm when the whole family would gather. Grandma and Aunt Juanita would be in the kitchen. Aunt Grace would help some. Aunt Ida had already made three large Tupperware trays of cookies, so her work was done.

When the four sisters were all finished we had cube steak, mashed potatoes with gravy, 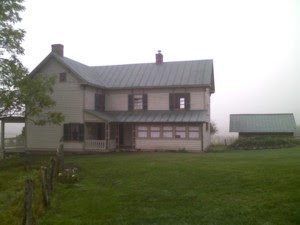 half-runner green beans, sliced tomatoes from Rene's garden, Parker house rolls, lemonade, iced tea. It is the quintessential family meal for me. Sitting around the huge hardwood dining room table with Uncle Paul saying the blessing and the sisters making sure everyone had something before they ate. Once in a while dad got to sneak some grilled corn on the cob onto the table (and I was a fan of that addition to my mom's family table).

But at Christmastime, when I was growing up, it was Mom that made the date nut bread. I wasn't very cognizant of the process, being more attentive to video games, TV, and running around causing general mayhem as a child. If I think hard, I can remember the batter in a bowl, a neat pile of chopped walnuts on a cutting board, and the smell of vanilla in the air. I have a vague recollection of always wanting to taste the batter and being disappointed that I wasn't able to simply put spoon to bowl. Some raw egg paranoia of my father's most likely.

What I clearly remember are loaf pans, large and small, lining the counter. And even more clear in my mind are the aluminum foil packages, each loaf wrapped in the only shiny that made the season "Christmas." I knew it was the home-stretch time to be good for Santa when Mom handed me a pre-selected count of small loaves to take to school and give to my teachers. No one ever thought I was sucking up. They knew without a shadow of doubt that my mother was doing the small thing she could at the holiday season to apologize for the hell I had, and would, wreak on their classrooms.

We always had some at the house too. Probably two or three of the large loaves for us. One or two for Christmas, and one or two to take to the mountain for the New Year's ski trip. They were always accompanied by a tub of cream cheese. My sister took a slice of bread, smeared on the cream cheese, and nuked the bread to 15 seconds just to soften everything up a little bit. My father would put his in the toaster oven to crisp the outside a bit and then spread on the cream cheese. 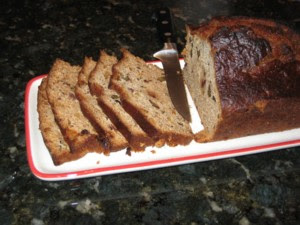 Twenty years later, I was going through some index cards my father said were my mothers. He wanted me to give them back to her. He was going through old boxes getting rid of things in the pre-renovation house cleaning. Well I'm guessing they were a set of cards Mom gave to him at some point, because she didn't need them. So I took them, read them, and got ambitious. I was walking through the produce aisle last year and saw dates. It was literally a light bulb moment. I bought them, a bag of walnuts, and trusted that my pantry was 'cake ready' with the dry ingredients I would need. Thankfully, though I don't bake much at all, I believe in a well-stocked pantry.

It was one of the best kitchen moments of my life. My apartment smelled like Christmas, my counter looked like a kitchen counter should, with neat little rounded-top, shiny silver packages. My friends and co-workers got date nut bread like my teachers had before them.

I remember calling my Mom. I've done some fairly amazing things in the kitchen in the past few years, and Mom has been amused and amazed at the fixation, the effort I've put in, the single-minded purpose to read more, learn more, cook more. But calling her and telling her what my kitchen smelled like, what the bread looked like; that was the best moment I could share with her. It wasn't a son and mother talking about some recipe from Food & Wine, or a new Thai place that opened up near the apartment, or even remembering the family gathering when Bec decided sweet potatoes with marshmallows were anathema to Thanksgiving and made a sweet potato souffle to prove it. 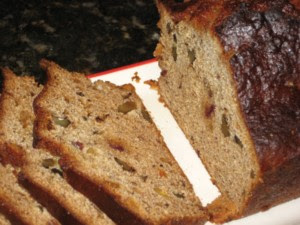 This was the little kid who used to help Mom in the kitchen by mixing 'potions' getting to spend time in the kitchen with his grandmother, long after he really had the chance. It was all Mom's time and patience and love at the holidays finally coming out through me.

Mom didn't get around to it last year. The kitchen in the new apartment was small, she and S were leaving to go to the beach in NC for the holidays, there had been travel for work. It had been a busy year. Me? I was just finished with a campaign, had closed up the office, and wasn't starting my new job until after the new year.

Down from Annapolis on Christmas day. Through the rain and the wind in Virginia, past Richmond, into North Carolina, east to Wilmington, past Camp Lejeune, down toward the coast. 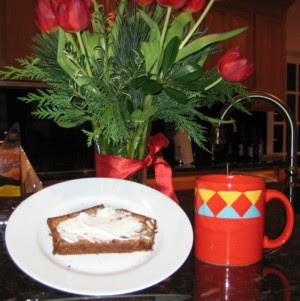 I turned off the main road on a cool and clear North Carolina night, down to Topsail Island to the bend in the road and then just to the left, last house before the gated community on the island's south tip. I lugged the bags in to the bedroom that was mine for a couple of days, walked back down to the main floor, gave and received some hugs...

...and put a shiny aluminum package on the kitchen counter.

Posted by redneck muppet at 7:31 AM

I found you through your comment on Serious Eats. I baked my Great Aunt Ethel's Date Bread this month and enjoyed a lot of the emotions of which you speak - ok, subtly speak. Great fun, eh? I actually wrapped them up with a bunch of assorted cookies and drove around handing them out to the utility crews that were working long hours to power up the plains after our devastating ice storm. Yeah, lots of warm fuzzies for me and hopefully for them. So, do you share recipes?

yeah, sarcasm and snark are much more my style than subtle...but i'll probably try to get better at subtle as time goes by.

i do wish i'd made more to hand out to other folks as well. there just wasn't time between all the other cooking, finishing work before the holiday break, and travel.

sure i'll share. grandma and mom aren't the recipe hoarder type, so i can't in good faith hold back either. drop me a line at redneckmuppet at gmail dot com.