And away we goooo... 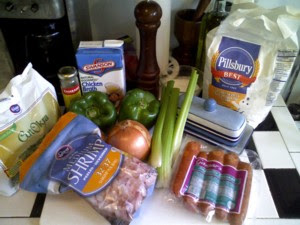 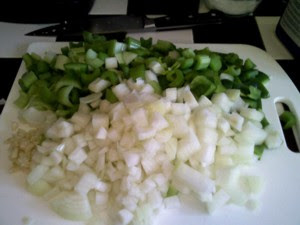 While that was happening, the cast iron got a small workout providing medium heat to the meat, andouille that is, cajun goodness. Just until the skin started to brown a bit, they'd be in soup form for long enough to cook through. 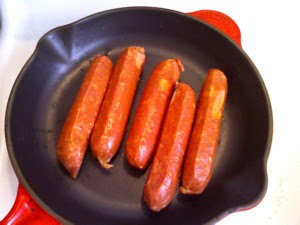 And all that stuff you see down there? It's the result of the pictures I took, plus the ones I didn't take of making the roux (flour and butter, equal parts, stir until it's the color you want), cooking the veg in the roux for 5-10, adding in chicken broth and sausage, then letting it go for 40 minutes, adding the shrimp and okra, and heating through until the shrimp were cooked. 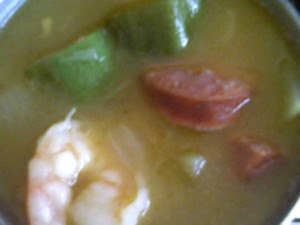 I threw about 1 T Old Bay and 1 t cayenne in to a large pot. The sausage give a bit of heat too.

Oh, and there were bay leaves.

Yes, it's better when I make my own stock. But Big Game wasn't looking for chicken in his gumbo, and I wanted to make it quickly so as to leave more room for laundry (I know, I know, where are my priorities. Trust me, they were in the right place. Stacks of laundry that big need building permits to be moved for cleaning.).

I served it over plain rice because I was lazy. There was no bay leaf in the rice, no boullion cube, no paprika. Eh, it wasn't plain for long. It got good and sauced in the bowl with the gumbo.

J seemed to like it. Swammy and Bubby were pleased. I had a small second bowl down at the pub.

Posted by redneck muppet at 8:11 AM