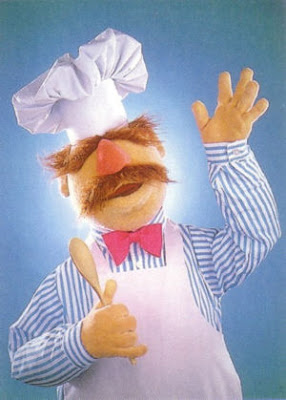 When your doctor calls you and tells you what you already knew you needed to do, it still seems to be worth doing more. Dunno, I just respect the seven years of school and residency, and internships, and lack of sleep. Anyone who missed out on about 4.32 years of sleep just so they could take care of me, eh, I listen.

So Kitchen Geeking gets less fatty and more phatty. There will be no loss of snark. In fact, while I'm committed to getting rid of some glycerides, I will still have taste buds and desire...and no steak on a regular basis...so the snark will likely increase.

Actually, it's also been a kick in the ass to do something else I've been meaning to do...read the stack of magazines I have and use them. Good stuff in there. The Cauliflower Curry was step one.

Now I have a whole week of food planned out.

We're starting off today with gumbo, because Big Game saw me two nights in a row after I'd been out of town for close to two weeks and said 'gumbo' more times then 'hello' and 'what's up.' I have to respect that. Big Game's good people. If he likes my food, I'll cook it.

And for those of you that say gumbo isn't low fat...fah. It's a hell of lot better than slow-cooked beef with a 1/4-inch fat cap on it and no skimming. Here's guessing the bowl I have has about 3-4 small pieces of andouille and maybe 3 shrimp.

I won't lose any health-sleep over that.

And the rest of the week looks good too.

Email ThisBlogThis!Share to TwitterShare to FacebookShare to Pinterest
Labels: about me, Cooking

I know this isn't Postsecret, but I've been stealing the Cooking Light magazines from the office for the past year. I can't help myself.