So in addition to cooking for Sam's, C &J, and pretty much anyone else in my social circles, I volunteer to cook for the office holiday party too.

I like this stuff. I spent all night yesterday on two big pots 'o goodness and a couple cornbreads.

You all know I'm a sucker for cornbread, right?

Anyway, no hotplates, a small microwave, and the need to feed about 15 people with a vegetarian option led to the clear choice of...soup. Warmed in crocks at the office today.

In fact, I'll be picking one of the crocks off R's porch in about 15 minutes.

We'll keep this simple, I made a pot of lentil soup for the meat eaters and a veg soup/minestrone something for the veg-heads.

The best part of all of this was that my shopping list last night was:

So here's the stuff.

And that eggplant? Never made it into the soup. S'okay, there was enough stuff.

More than enough. The pot was stuffed. 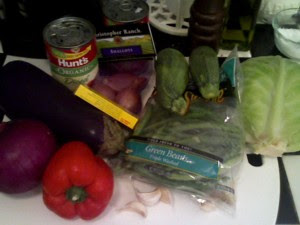 And here's my art-cell picture of the night. Today's star? 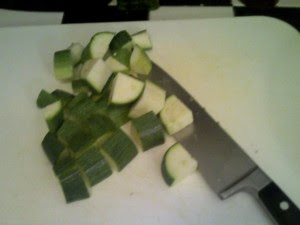 There was quite a bit of color in the minestrone, and I was quite happy about that. Made me feel like I wasn't pawning the crap-vegetable soup off on the non-meat-eaters. 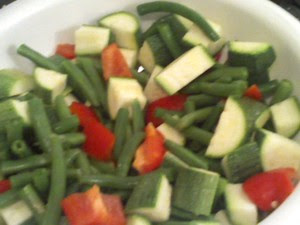 Sweat, and work it, and sweat. 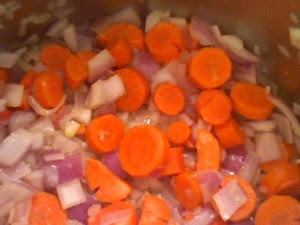 Throw everything else in the pot (I cheated with a bouillion cube) and bring to a boil. Then simmer until the veg is just about cooked (remember, crock pot time today).

I went with beans instead of pasta. Healthier, more traditional in my mind.

Also, first thought I had, so easier to go with it than have internal monologue time get in the way of soup time. 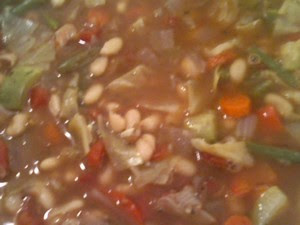 There's the barest pinch of ground cloves in there.

I mean, I did when I first tasted after adding.

But really, it mellows, and give a nice little sweet pinch to contrast the crushed pepper.

Not sure I'll do it again, but it definitely comes no where near the level of "Oh, Sh$%, I ruined the soup."

Posted by redneck muppet at 7:58 AM