There will be a part four. Not because I'm trying to string this out, but because I am waiting to receive two recipes. I am waiting because my family loves to find holiday orphans and take care of them for turkey day and hay-soos day. This year it was S's colleague P. And she brought two of the three recipes I need to pass on to you. I can fake the other one, since mom told me where she got it.

First, the photo spread. I know, I could have taken more prep shots. But I was with family, and that doesn't happen too often, so I only took the bear minimum.

You should, however, still pat me on the back for the bird carving. Note the whole breasts, sliced think and off the bird. Note the fine work to keep the thigh whole after separating thigh and drumstick at the joint with ease (well, you would note if I had a better camera. Phooey). 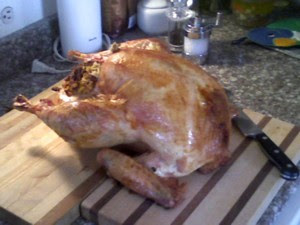 Yes, that is stuffing in the bird. Mom hasn't killed anyone yet. It was cornbread stuffing. It was de-friggin'-licious!. 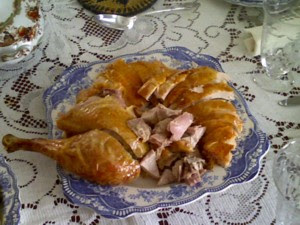 That's right, one thigh whole, one chopped for the dark meat lovers. P (of the two recipes I still need to get) took the whole thigh because she's a dark meat fan. Kept complimenting me on not skimping while I was serving the bird (which was part of my job at that end of the table). 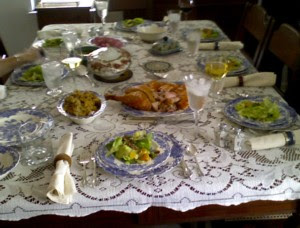 The salad was a mom classic, the refreshing Bibb with orange and classic vinaigrette. She added toasted pecans this year. I oughta know, I toasted them.

The mashed taters are in the covered dish behind the turkey. I done good. Turkey stock, half-n-half, butter, salt, pepper, hand mashed. Simple, creamy, and tasty.

The pink bit behind them is the cranberry recipe I'm waiting on. Let's just say there's an extra kick you're all going to love. 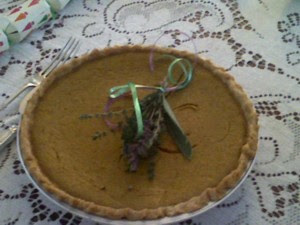 S brought the pie. She also brought a chocolate goodness that was not brought up from the car. Jessie the girl dog got to it. Apparently, she is not as allergic to chocolate as some pups. D would not allow it to be brought up and presented even if S had carved out the dog-bite portions. I must say, I expect he was perfectly fine with salvaging it in the privacy of his own home later that night...it looked GOOOOOOOD.

That's homemade whipped cream. And by homemade, I mean mom and I took turned whipping it with a whisk. Small city kitchens mean mixers are appliances that are off the 'essential' list. 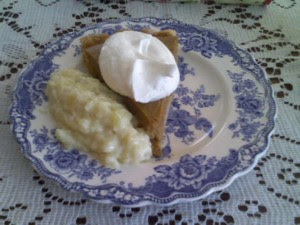 The gloppy stuff is one of the recipes I'm waiting on. You'll have to wait too. Suffice it to say that licking of plates was contemplated, and licking of silverware likely occurred.

Posted by redneck muppet at 7:45 AM

lemme guess: the extra kick in the pink stuff = jäger?!