So you may have surmised that I cook. Mostly I cook to relax (and eat good food). On Tuesdays, I try to cook for the folks at Sam's. It started out one night when I decided to make a pot roast and was so blown away that I could pull it off that I brought some down to G at the bar. Well, G liked it, so did D and T, and CS, and Chez, and Red, and damn near everyone who got some. So I started doing it every Tuesday I could. It works out. Those guys are the people at the place that keeps me from going crazy. They don't get as many home-cooked meals as they could. I love to cook. It's a lot easier to cook for a bunch than it is to cook for one (at least without getting bored by leftovers and wasting food).

One of the first recipes I tried that was post-country cookin' was this one. Baked Rigatoni with Eggplant and Spicy Sausage. It's a Tyler Florence riff from Tyler's Ultimate.

I've seen others that don't put the whole recipe if it's from someone's cookbook. I agree. Go buy the book if you really love it. I love it. I bought the book. You might also note that, the people at Food Network have some kinda deal going with Tyler, and don't have my concern. Hence the link for the recipe's title above. K, Sarah, Sarah...

It's a combo of sausage, eggplant, rigatoni, and a classic marinara. You add cheese. You bake it. It's damn tasty.

I use Demus Sausage when I can. Here's what they say about themselves.


It starts out simply, with sausage in a pan. Stainless for me. I would LOVE to have cast iron large enough to handle this. I'd also love to have my cast iron skillet back from Wayne's (why it's still there is another post...and a good one). 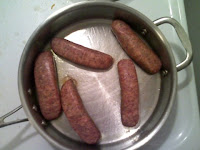 After you brown and remove the sausage, you cook up the eggplant. 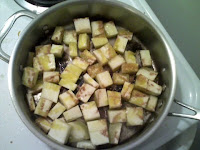 Then you combine all the other stuff (excepting the eggplant which you've already sauteed, right?) into a marinara. 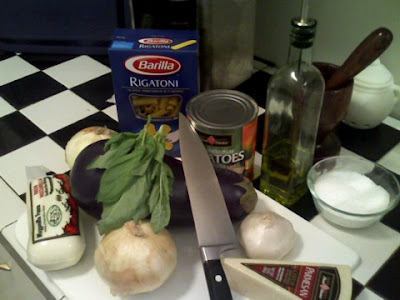 And really, that cheese, not part of the Marinara. It comes later. Just trying to make the picture as snazzy as I can with a camera phone.

Sweat the onions, add the garlic, then the whole tomatoes (hand crush them, play with your food), then the fresh basil. The idea is a quick sauce. You don't want this to cook forever. It's a fresh bite with the creamy cheese, the earthy eggplant, and the spicy sausage.

Get your water ready early for the pasta. You need to start cooking it when the marinara starts. Package directions folks, package directions. You might pull it a few minutes early since it'll be in the oven in some marinara for about 40 minutes, but there's not much liquid in the marinara, and that's not really that long in the oven for the pasta to cook. So just get it al dente and move on with your life.

Once you have it all together, you mix it up in the baking dish and throw it in the oven so the sausage cooks through and the cheese 1) melts, and 2) gets that delicious brown flavor (That's right, I said 'brown flavor.' It is a flavor, and you know it).

And here's what happens when you plate it. 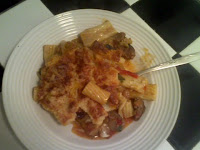 I was disappointed the first time I made it because it seemed un-saucy. I have come to realize after 1) re-reading the recipe, 2) looking at the picture in the recipe, and 3) actually stopping to taste the amazing flavors in the dish; that there is no need to drown this dish in sauce. If you want to make the classic baked rigatoni with red sauce, do that. This isn't that.

It can get oily. When you pull the eggplant out of the pan, give a little shake to release some of the delish fryin lipin you've been using. I don't worry too much about it, since the flavor's so damn good and it carries all that spicy sausage goodness throughout the dish, but you might be worrying about things like that in today's crazy, healthy world.
Posted by redneck muppet at 7:23 PM