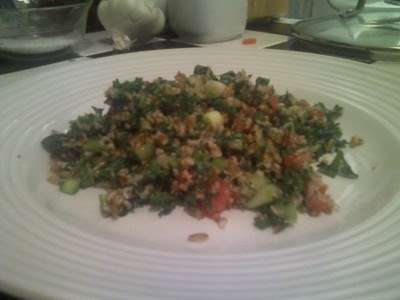 Okay, so the picture's weak. It's a camera phone, I'm not Heidi.

The tabbouleh recipes at epicurious.com, the Food Network, and Cooking Light were all very similar. Different amounts of water to bulgur, different amounts of lemon juice, some without garlic (P-shah), some without scallions (on which commenters always said add, so i did). Suffice it to say, it's not Sahara's or Ali Baba's. Again, I'm not those guys. Hopefully Raya will think it's sufficiently far away from white guy cooking lebanese, and sufficiently close enough to good flavors. I think it's pretty damn tasty.

Add the boiling water to the bulgur in a bowl. Cover with plastic and let set for 30 mins.

Drain in a seive.

Add it into a bowl with all the other stuff.

Adjust the salt and lemon as needed.

Eat it already.
Posted by redneck muppet at 7:48 PM