Ding, Ding. We Have A Winner 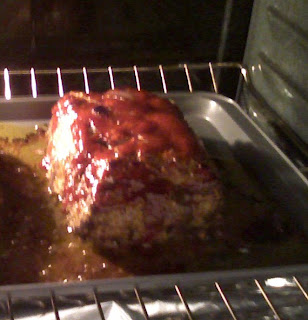 So here's what happened today, and why it matters to you. The votes (that is Steph and Rudi's e-mails) were in support of the Good Eats recipe. You all know me, I never looked at the recipe before heading to the store. So we got a teeny bit off track.

Instead of garlic croutons, I used Italian breadcrumbs.

Instead of his glaze recipe, I used some Carolina BBQ sauce (about 6 T) with extra ketchup (about 2/3 cup). It'll be nice, real nice.

Instead of 1 red bell pepper, I used four stalks of celery.

I had no cayenne, ooops.

And, as I type this, I realize that I forgot the egg in one of the loaves. Quel damage...we'll see on that one. Won't taste any different. I'm guessing the bar staff won't mind too much.

Now y'all might read all that and say to yourself..."Self, that's not even close to the recipe Alton had."

Oh contrair, mon frere. Go back and look at what he had and what I substituted. The only real flavor difference (cause that little cayenne won't drastically change the flavor compound) is probably the celery for red bell swap. And I stand by it. I like the celery in there.

Ok, ok, the meat swap will change the flavor. The pork will add more fat content. And that IS flavor. The chicken won't really add ANY flavor, it'll just counterbalance the added fat from the pork.

But still, this is basically the same recipe. That's the fun part. Goof, and recover. Forget, and substitute.

I'll let you know if anyone I feed with this give me grief for subbing out their favorite ingedient (red bell peppers? really?).

Why It Matters To You

And because it inspired Rudi to go home and make himself a meatloaf sandwich.

And finally, because it might just make me a happier person for all of you to encounter. Trust me, if I get a cold meatloaf sandwich for lunch tomorrow, I will be happier. And that, dear readers, should matter to you.
Posted by redneck muppet at 7:35 PM

Email ThisBlogThis!Share to TwitterShare to FacebookShare to Pinterest
Labels: meatloaf

You weren't kidding -- that looks wonderful. What did you have with it? (I'm HUNGRY.)

actually, i didn't get any until the day after. saved a piece for lunch. i took that (and it's brother, which is baking right next to it) to the bar to feed to peeps.

Now you're just being cruel.